Snapchat and Marketing go hand in hand, it is no longer an obscure little social network. With over $100 million active daily users it has become the third most popular social media platform among millennials. The company is valued at $16 billion and marketers are elbowing their way through, getting extremely creative with their campaigns to get traction amongst their audiences.

Why should your small to medium size business get in the game? Well, here are just a few facts about this ever so popular mobile app.

Many companies have already caught up on the trend and started to use Snapchat as an integral part of their marketing mix, skyrocketing their engagement up to 3000%.
While many big players such as CNN and McDonald’s use sponsored advertising (Discovery Snap ads, Geofilters and Lens), there are numerous simple ways you can market on Snapchat without spending a dime and this is what I’ll be talking about today.

We all LOVE CONTESTS, don’t we?

Contests are an awesome way to recognize and reward followers, but also to get them acquainted with your new social media channel. When you create a new Snapchat account, you will want to shout-out about it to your fans and the best way to do so is by hosting some sort of competition with a giveaway where they will be asked to follow you.

Unlike Facebook contests where it’s all about likes and shares on Snapchat the photo and video sharing options are built in. This means you can encourage your fans to do a whole lot more and get creative while doing it. Have a look at this example.

One of the best promotions done so far is by Mondelez in Australia. The company ran a Snapchat competition where they encouraged their followers to snap a TimeOut chocolate bar and then get creative with the app’s drawing tools. The contestant with the most innovative snap received a prize of $10,000 while the company got thousands of entries and a massive online exposure. 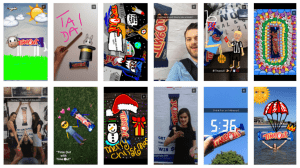 Cross-promoting your contest across other platforms to curate your Snapchat community and sharing your unique Snapcode (an image that users can scan to start following you), since searching for new accounts is not natively built in the app.

Don’t forget to follow up and show what the winner is doing with that product and how they are enjoying it. There you have it, more ideas for future stories.

All about Sneak Peeks and EXCLUSIVES!

If you are launching a new product or service which you are eager to share, create a 10-second sneak peek exclusively for your Snapchat fans and encourage others to follow. Strike your audience’s interest by providing content that is available only to them and no one else. Get them excited by letting them know that they will be the first ones to get their hands on a product.

Acura, an automobile company, demonstrated it with a sneak preview of their NSX supercar that they send out exclusively to the first 100 users that added their account. That’s pretty special if you ask me. Here is the video that they sent out.

Talking about exclusive content, Penguin Books campaign last year became a sensation when they announced that fans of the book could join a community on Snapchat to receive exclusive access to book content and competitions. The publisher encouraged their fans to create snaps and messages throughout the promotion to keep a high level of engagement and as a result, the book became a #1 best selling girl online series. 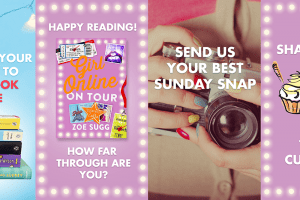 If you want Snapchat to work long term for your business, you’re going to want as many followers as possible and one of the ways to do so is by having your existing followers recommend you to a friend. Start by adding a snap to a story and let people know that you would love them to introduce you to their friends and family or to anyone who might be interested in your products. Reward them with something valuable and have the new friend tell you via Snapchat that they were referred by a specific user to get them started in the conversation and track the effectiveness of your referral campaign.

You could use an example from Cooperative Electrical that ran a voucher campaign targeting students, where the followers of their Snapchat account would be able to redeem a £30 off voucher for a new laptop, but on top of that have them refer a friend. 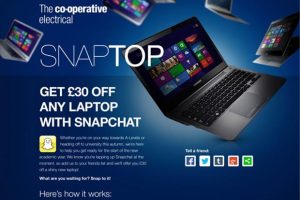 A recurring practice when it comes to driving more sales for your e-commerce store is to use discounts and freebies. Snapchat is a great platform for that and the fact that snaps have such as short lifespan makes them even more unique and creates the good old known FOMO (fear of missing out) effect. In fact, disappearing videos, photos and images are one of the main perks that make this media channel so popular.

When your customers see the snap, they know they have limited time offer and that they have to act quickly if they want that coupon or deal. For a fashion brand, One Piece, this time-sensitivity has worked perfectly for their Christmas Advent Calendar campaign. The company provided their audience with daily offers for online store discounts with snaps that would vanish within 24 hours. This also allowed the brand to change up the content of the offer each day and keep it fresh. 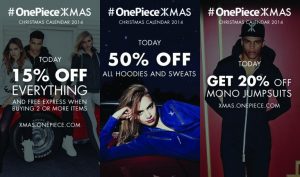 Use clear and simple language, include a Call to Action (image of your Snapcode with your Username) and keep it light. Try to offer a deal on a product that is just being released or a service that is normally available only to premium members.

Hint: A cool fact about screenshots on Snapchat is you can see exactly how many you got and by whom, giving you a great tracking mechanism, so ask for one to drive more engagement and keep track of your audience.
Don’t make your coupons too frequent, you don’t want to lose the “surprise” and “exclusivity” effect.

One of the best techniques to connect with your fans in a meaningful and interactive way and is especially useful if you are an event or location based business. Build a relationship and keep your audience in the loop by showing what’s going on behind the curtains. Snapchat your events, meet ups and updates for a deeper connection. Add them to your Story feature in a consecutive sequence and don’t sweat it if the graphics or video quality is low, it’s expected to be. In fact, the grittier it is, the more authentic the content.

Check out MLS’s recent behind the scenes view of its players before an all-star game. It doesn’t get more authentic than this. 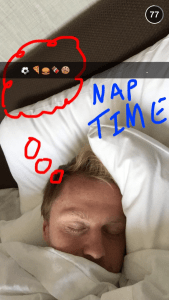 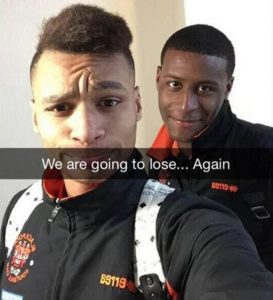 Producing simple uncomplicated videos and images in seconds, without having to edit them is basically all that a brand could ask for, so it doesn’t matter whether you’re an owner of a kids clothing store or you sell cleaning products, shooting some real life scenes will provoke your customer’s curiosity.

Snapchatters consume content produced by their friends and brands because it’s fun, unique, exclusive, fast and intimate. Offering behind the scenes shots is like having a private conversation with your audience in a cozy cafe.

Have Your INFLUENCERS Take Over!

Tap into the power of influencers with Snapchat takeovers! Find out who are some of the kings/queens of Snapchat with the target audience that you need and have them take over your account for a few days or even a week. If you don’t know a relevant influencer, you can use FameBit, a StoreYa partner, to have influencers promoting your brand. Use code: storeyapartner to get $25 off >> www.famebit.com

Patch Kids has launched a five-day Snapchat campaign enlisting social media star Logan Paul to take over the brand’s Snapchat account while filming pranks that he is pulling in NYC, incorporating the candy and it’s “first it’s sour/then it’s sweet” device into his usual mix of online presence. The campaign instantly became a hit, reaching both Logan’s audiences and of Patch Kids. 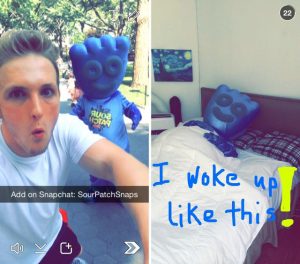 With the app’s take on creativity and humor, it has never been that easy to interact with consumers on the go and it is undoubtedly claiming its role as one of the social networks with the most captivated audience.

One of the best things in Snapchat is that unlike Instagram and Facebook images, it doesn’t have to be pretty, it doesn’t have to be your best shot, it doesn’t even have to be half perfect. All you need is to take a picture or video, add the text to share your message or idea, maybe swipe once or twice to add some extra effect, and that’s it. As easy as that! Go ahead and create your Snapchat campaign.