Live streaming has been around for a while with Meerkat and Periscope bringing live video into the spotlight and making a huge buzz in online advertising. Brands realizing the potential have jumped right into it and live video has taken a huge role in making a better brand experience.

With Twitter recently acquiring Periscope, you would think that the market is saturated and that there is no room for the new kids. Well, think again! Facebook has now stepped up the game made their live streaming feature accessible to all. While previously available only to celebrities and a handful of people, live video on Facebook is now a part of everyone’s experience and unlike other apps, it doesn’t require any extra extensions or downloads – you can broadcast and watch video straight off your newsfeed and users can follow their favorite brands at any time of the day.

While a Facebook live video is still relatively new, it’s picking up speed and users are already spending 3x more time watching live videos in comparison to non-live videos and the engagement proved to be higher. In addition to that, Facebook has just announced recently that they are giving priority to live videos and place them higher on the News Feed.

Now, let’s see how small businesses can benefit from this feature and make it a part of their marketing strategy.

Q&A Sessions And “Work Behind The Scenes”

Live video is probably the best way to answer your clients’ questions and if most of your fans are on your Facebook page (and I’m guessing they are), this is a brilliant opportunity to reach out to your audience and skyrocket your engagement. Think about it as a TV Show where people call in the studio and you get to speak to them live, answering their most evocative questions. Only, in this case, the viewers are leaving comments in real time instead of calling.

Tip: Don’t get demotivated if you can’t answer a specific question, just use the usual “let me get back to you’ response and simply come back to it later on in your next video. Remember to greet and call your fans by name, when you’re interacting. Try to pay attention to all comments, be responsive and if by chance you miss someone’s question, just get back to them afterward.

Benefit is a cosmetics company hosts weekly “Tipsy Tricks” demonstrating how to use their products and create great looks for any occasion.

This might sound self-explanatory, but live streaming is a super effective way to introduce your new product line. Imagine you could speak to your fans about the next winter sports gear collection and give some teasers as to what to expect. This will build anticipation and your engagement might just skyrocket. Show some behind the scenes moments, such as the making of the new hat or jacket or a watch. God, I would die to see how my favorite designer is making her next pieces.

Unlike Periscope, Facebook doesn’t limit you to 24 hours for replaying a video, on the contrary, you’re encouraged to share it with your larger audience. You’ll have it displayed on your timeline along with your other posts. You can even save it to your phone camera in case you want to edit it and share it on your other social media platforms.

Are you participating in a conference or maybe going to a trade show? Take your audience with you, fill them in, have them feel a part of the experience. A video speaks a million more words. The best part about Live Video is that it has a human factor in it, which means you can be goofy or not necessarily 100% professional, the whole point is to give a peek into your life and share those moments, just like you would with your family and friends.

Facebook now allows 4-hour live streams for users broadcasting using Facebook App and live API, which is pretty darn great, compared to the previous 90 minutes. You can easily fit in an occasion in that time frame.

ESL sports company, for instance, has hosted 400 events to date and it aims to go live six or seven times a day during the tournaments, with each one running between 15 and 30 minutes. Today, ESL sees 20 million views per month across its network of Facebook pages.

Check out how Jason Carr from Fox2 in Detroit is taking his Facebook viewers on a ride to a new gig at WDIV-TV, Local 4 News.

Did you want to show off that client testimonial? There is no better way to do it then having it live! Have your clients sit down with you over a cup of coffee in your office or in your local Starbucks and start chatting with them, crack jokes and have your viewers participate and ask questions.

A few tips before we go:

According to Brandlive, 44% of businesses are already using live video and another 20% are planning to hop on that train in the upcoming year. Some of the most innovative brands, such as Apple, MasterCraft, Wendy’s and eBay have already reaped the rewards of the new trend and there is no doubt it will play a key role in the future of digital marketing.
To start using the feature, login to your Facebook account and head over to your News Feed > tap on the Status bar to write a new status > tap on the button on the right hand side that looks like a silhouetted person> select your privacy options > tap “Go Live” and start broadcasting! 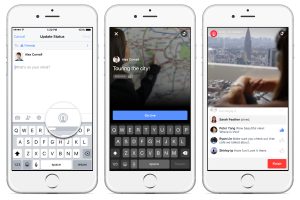